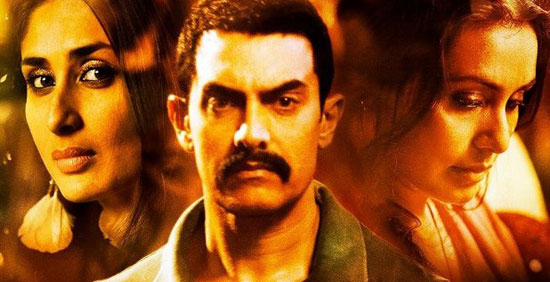 How much you like the big reveal of Talaash depends on how much cheese your digestive system can digest and how many palms your face can accommodate. But no matter how corny the twist, the big difference between this film and, say, a Vikram Bhatt movie is the presence of the one and only Aamir Khan, who keeps things interesting  and serious, and more importantly by not coming across like Joey Tribbiani cast in a drama.

Compactly directed by Reema Kagti, Talaash is part murder mystery, part drama, part melodrama and full Aamir showcase. Whether it’s the piercing stare of its leads eyes, or the blue-green-yellow canvas of cinematographer Mohanan that does the trick, or Ram Sampath’s moody soundtrack, Talaash almost never fails to be atmospheric and immersive. The plot is simple, unfortunately a bit too simple – a speeding car on a night in Worli mysteriously loses control, rams into the footpath and drops into the sea, killing its driver, a famous movie star. Inspector Shekhawat (Aamir Khan) investigates the case, dealing with shady pimps, an irresistible hooker (Kareena Kapoor) and a limping tapori aptly named Timur (Nawaz). Shekhawat also has to battle his own inner demons and deal with his depressed wife (Rani Mukherjee). If you’re looking for an action packed twisty-turny noir, you’ll have to look elsewhere because Talaash unfolds at a leisurely pace, and doesn’t offer much more than a clichéd finale, however the journey is itself adequately gripping. It’s not as intelligent as its trailers made it out to be, but is still an engaging enough ride and a nice alternative to folks tired of Salman Khan and Rohit Shetty’s daft brand of cinema.

It helps that Aamir is omnipresent in the film, because he is perhaps the only current Bollywood star who can make a mediocre story interesting. He seems committed to his role, complete with brooding eyes and a permanent Matunga policewala scowl. Much has been made about his short stature but the man carries the uniform convincingly, partly due to some expert bit of camerawork. Reema Kagti probably used the same camera techniques that Peter Jackson employed in Lord of the Rings to make Gandalf taller than the Hobbits. Sadly Aamir’s mustache, which is the biggest mystery of Talaash remains unsolved even after the end credits roll. The other goodie of Talaash is Rani Mukherjee - the silver lining in the horrifyingly horrible and terrifyingly terrible Aiyya acts her butt off here, and it’s ballsy of her to appear sans any makeup. Nawazuddin Siqqiqui is great in what is probably his last role as ‘that guy in the movie’ - he plays the same character as the one in Munnabhai MBBS, and it boggles the mind to grasp that Talaash is set in the Munnabhai universe. There is also Shernaz Patel in the most thankless role of her career as a hyperactive psychic who seems to regularly consume the pills that Charlie Sheen carries in his pockets. Kareena is her saucy and sassy self, smiling like the Cheshire cat.

It remains to be seen what dialogues Anurag Kashyap added in Talaash, because those who watch the film can testify to the unintentionally hilarious line reading in the final twenty minutes – although they only exist due to the nature of the twist. There are a couple of curiously tacky scenes, one of which involves a couple staring at each other, unable to reconcile, while their ghosts pop out of their bodies and embrace. It’s meant to add drama but given the talent involved in the film it ought to be better than it is. Post ZNMD and now Talaash Zoya Akhtar and Kagti seem to be a filmmaking team which makes truly gorgeous looking cinema that just barely manages to rise above the lackluster story. They manage to capture the little moments unlike anyone in the industry. Hopefully they choose a solid script next, because they’d be an unstoppable force with one of those in hand.