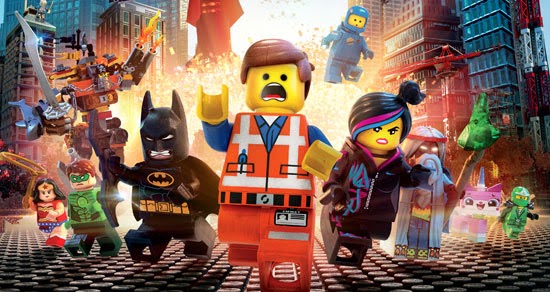 At the end of The Lego Movie I stood up, clapped and cheered. I became a 7-year-old again. This movie cannot be quantified in a simple review so here are ten reasons why this is one of the most enjoyable films I have ever seen:

1) There are Batman, Superman, Gandalf, Dumbledore, Wonder Woman and Shaquille O Neal fighting together in this film. And Bert Macklin is the hero who leads them all.

2) Superman and Green Lantern are voiced by Channing Tatum and Jonah Hill respectively. The former superhero is too cool to hang out with the latter.

3) This is one of the, if not the most gorgeous film ever made. The animation is groundbreaking - the Lego Characters move in Lego motion, and they have different frame rates than their backdrops.

4) There is a Lego ocean in the film and it’s a landmark in CGI. The ocean is a vast collage of blue Lego blocks that flow individually to give the illusion of water. Insane.

5) The film is so engrossing, imaginative and supercharged it feels like being inside a Lego game that a kid is playing with. You won’t believe this until you see it.

6) Phil Lord and Chris Miller, the makers of Cloudy with a Chance of Meatballs and 21 Jump Street are comedy geniuses. They really get hipster culture and are the only filmmakers to have internet memes and hipster culture jokes instead of pop culture references that are found in most movies.

7) Lord and Miller are also the kings of satire. The self-parodying comedy of the film is bone crushingly hilarious.

8) The film has a song titled ‘Everything is awesome’ that pokes fun at generic pop songs in kids’ films, and it slowly, somehow becomes catchy in itself.

9) This film has a severely awesome resolution of the centuries old hero-villain conflict that you will never see coming.

10) Despite the constant laughs, the dazzling visuals and the thrilling action the film’s greatest strength is its charming, surprisingly deep and thoughtful story.

I cannot say anything more about the film because I’m off to watch it again. I suggest you do the same pronto.