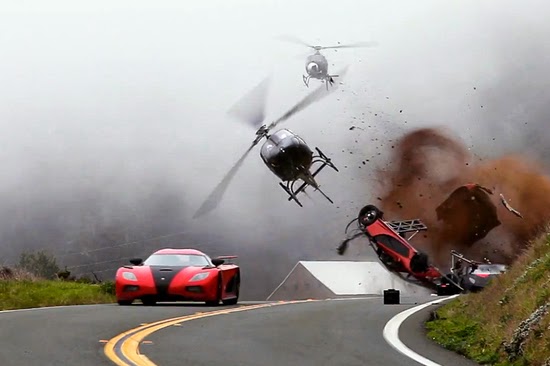 There is a fundamental flaw in movies that are based on video games. It’s that most video games, if not all of them, are based on movies. So when you make such a movie, you’re making a film based on a game that is based on a movie. There is no room for ingenuity left, which is why most video game adaptations are terrible. The latest one to fall into this trapdoor is Need For Speed.

I grew up playing NFS and I still sometimes pop in a copy of Most Wanted on my PS3. But despite being such a big fan of the game I had no expectations from the NFS movie, for the simple reason that I knew it would suck. It’s a curse and the track record consists of recent duds like Doom, Max Payne and Prince of Persia. Hitman was probably the only memorable recent game based movie because it got a few things right – the aesthetics, the action, the milieu, the characters were all vintage Hitman. On that front Need For Speed achieves its goal – it looks and feels very much like an NFS movie, right down to the racing tracks.

It’s everything else that it stumbles in – the characters, the story (or lack thereof), the boring protagonist, the generic blonde love interest, the stock baddie. And when you have Aaron Paul as your hero and you still manage to make him tedious, you deserve to be whipped. I’ll refrain from making any NFS based puns but this movie just doesn’t have the Nitrous boost that it needed to be exciting.

Right from the opening scene Need For Speed takes itself too seriously. Director Scott Waugh earlier made Act of Valor which was cool for its focus on realism, but awful because it had real marines and not actors trying to act. So to remedy that Waugh cast a bunch of extremely charismatic and good looking actors like Paul, Dominic Cooper and Imogen Poots but gave them some seriously horrible lines to deliver, in a plot that is actually more clichéd and flimsy than NFS Undercover. Moreover, he superimposes the super serious tone of the film with awful cheese like this:

“Your mom (Followed by raucous laughter)”.

And then there's Michael Keaton in a five minute role with lines like “Racing is art. Racing for passion – that’s high art”.

To its credit Need For Speed does differentiate itself pretty well from the Fast and Furious movies. The latter actually borrowed heavily from NFS Underground but this movie uses real cars even in the crashes and big stunts to look more visceral. There are a couple of saucy action scenes, and the final race is fun. If only the film were a bit self-aware, or at least humorous to keep itself entertaining. It’s not like there aren’t good video game movies – Silent Hill and Final Fantasy were well made. The guys who made The Lego Movie could have made a great NFS movie – hopefully they’ll get to direct a video game adaptation someday.