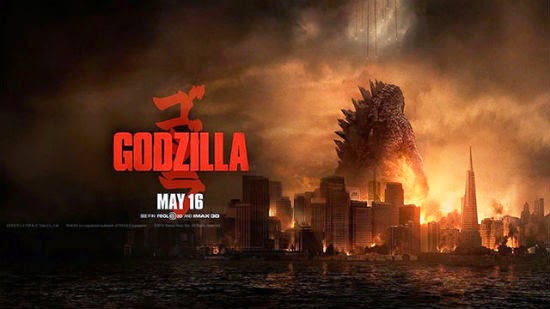 Gareth Edwards’ Godzilla is not any of those kinds of movies.

Remember in Jurassic Park, where the dinosaurs appeared only for a sum total of fifteen minutes, and it was still entertaining as hell because there was non stop suspense and a sense of intrigue and discovery?

Godzilla is that kind of movie.

Some might be pissed because it’s that kind of movie. As for me, I’m very glad that this is a Godzilla movie with a lot of heart, soul and a fairly decent helping of intelligence. The biggest surprise, however, is that fact that Godzilla is not just a Godzilla movie, but it is also the best Superhero movie of the summer.

The 1998 Godzilla can only be enjoyed for its unmitigated awfulness. Director Gareth Edwards knows that this is 2014, and he is aware of the previous Godzilla’s problems, and he takes on this project with the passion of a die-hard fan. If you’re a Godzilla junkie, this movie is your early Diwali gift.

We have a young Lieutenant (Aaron Taylor Jonhson) stuck on the road with his scientist dad (Bryan Cranston) who is obsessed with finding ‘something secretive’ in Japan. Turns out they do end up finding that secret and all hell breaks loose. That’s all you need to know about the story, and the lesser trailers you’ve seen the better. The rest of it is a collection of clichés including the worried nurse wife, the kid in danger, the daddy issues, the works.

But it’s how well Edwards uses the clichés in the film that will surprise you. A crazed overemotional scientist? Believable, because it’s freaking Bryan Cranston playing the character. Military procedures? Immersive, because Edwards stages the scenes with some seriously impressive knack of building tension. Our young hero is the expressive and likable Aaron Johnson and not Shia Le Beouf so you do tend to give a few shits about what happens to him. And when the big guy finally arrives he literally stomps upon every cliché and complaint of yours with his ginormous foot.

No seriously, Godzilla’s entry is epic. I had a surgical stent in my body while watching the film and I still clapped and cheered loudly when Gojira showed up. He’s fucking huge. He’s a badass mofo. Edwards knows that Godzilla is the guy to cheer for, not be mindlessly afraid of. He turns the monster into a superhero in a rather awesome scene where introspective Japanese scientist Ken Watanabe exclaims ‘Let the monsters fight!’

And the battle scenes are terrific. The scale is massive, the CGI is super detailed and the Kaiju artwork is really fucking cool. The 3D isn’t the best, but the super wide shots are superbly choreographed to show how puny humans are, and you’ll get the best experience in 2D. There’s a sequence involving a freight train that’ll leave you frothing, and the military halo jump seen in the trailers is even more amazing on the big screen.

There’s absolutely no comedy in the entire film because it’s not trying to be a comedy. The tone remains consistent – pure tension from start to end. If you want unnecessary irritating rubbish in your summer blockbusters, Gareth Edwards has got something to say to you and smarmy hacks like Michael Bay: Kreeeaaarrghhhh.