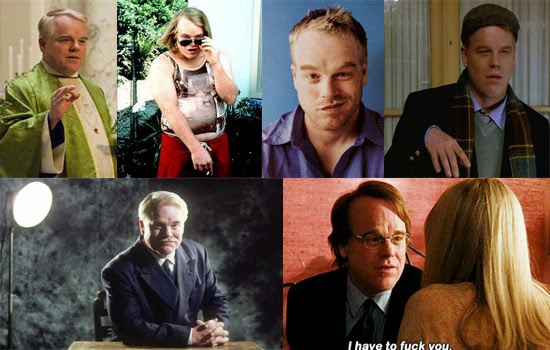 “I will be dying and so will you, and so will everyone here. That's what I want to explore. We're all hurtling towards death, yet here we are for the moment, alive. Each of us knowing we're going to die, each of us secretly believing we won't” – Phillip Seymour Hoffman, Synecdoche New York.

Ten years ago I was a Jennifer Aniston fan and was watching Along Came Polly on the telly. It was a terrible film starring Ben Stiller rubbing his face against a sweaty naked basketball player. The film also had a scruffy, ginger haired, overweight, deep voiced, wax faced actor cracking jokes about farting and spanking the heinie. But there was something peculiar about his delivery of the jokes – it wasn’t loud frat boy comedy. Somehow this actor managed to render all the lowbrow humor with panache and rich sophistication. It was bizarre and it felt watching a love child of Om Puri and Jack Black. I Googled his name and it was as peculiar and unforgettable as his performance.

A year later Capote arrived on Piratebay. I had a 64kbps connection that time and it took me three days to download it. I watched the whole movie, loved it, and IMDB’d it. And I spilled my drink. I’d never realized the same guy from Along Came Polly was the dude who played Capote. He’d completely disappeared in his character and even his voice was different. As my friend over_rated told me, he was a better Capote than Capote himself. As I sat back in awe, one thing was clear to me - this Phillip Seymour fellow was not going to dick around in shitty roles. This guy meant business. And I had to watch everything else that he had been in. Thanks to the wonders of utorrent, my love story with PSH began that moment.

I am ashamed to admit it but I was a bit of a homophobe back then. I was an ignorant kid and the society I grew up in only taught me to make fun of homosexuals. Two days and 700 aXXO megabytes after Capote, I watched Boogie Nights. Hoffman played a gay man and it was pretty unsettling for me to see him in that role. His Scotty had long hair, wore sleeveless tropical tops that enhanced his paunch and walked and talked effeminately. Amusing. But as the movie went on I got sucked into it and found myself sympathizing for Scotty rather than laughing at him. I realized Scotty is trying to ‘belong’ and is repeatedly failing at it because no one takes him seriously. After being rejected by Mark Wahlberg Scotty tries to cover it up and pretends to be drunk, sits alone in his new car, cries his heart out and calls himself an idiot. It’s a powerful scene, and I haven’t made fun of a gay man ever since.

Somehow earlier I’d little interest in watching Magnolia and Almost Famous, but I watched them both back to back only because Hoffman was in them. I was quite bowled over by the PT Anderson-Hoffman tag team and I couldn’t get enough of them. I damaged my ribcage laughing during the ‘Shut the fuck up’ scene in Punch Drunk Love – a movie that had Adam Sandler as its selling point but had Hoffman as its biggest asset. He didn’t get the recognition he deserved but appeared in a string of small roles in big films and ended up as the most memorable aspect of those films.

Red Dragon, Cold Mountain and Patch Adams were all disappointing films and yet Hoffman managed to breathe fire into all of them.

Matt Damon was the madman in The Talented Mr Ripley but Hoffman creeped me out more in this little scene at 0:23.

The most memorable part of Twister? Hoffman’s perverted and profane cameraman.

The funniest and most likable part of the highly unfunny and unlikable Flawless? Hoffman’s adorable drag queen, where he made Robert DeNiro look mediocre.

State and Main? Oh that comedy film with Hoffman.

The 25th Hour? That film with the Norton monologue and Hoffman.

Hannibal? That film where Hoffman is tied to a wheelchair and set on fire.

That’s how indelible this guy was. He was very good in great cinema and great in bad cinema. He was a sort of a magician really - he didn't need any makeup or fake accent to play a character - he was just himself, and yet somehow he was a completely new character. And despite his distinctive voice and face, he could play any character. He could make you cry and laugh in the same movie, and no one else could say ‘Go fuck yourself’ as beautifully as him, as demonstrated in Charlie Wilson’s War.

I was a little skeptical about Mission Impossible 3 since the previous movie was cattle manure, but Hoffman was absolutely raging as the villain. I’d seen the funny Hoffman, the dramatic Hoffman, but I wasn’t prepared for a scary as hell Hoffman. He had this ability to explode on camera when you least expect it. In the entire movie he was this quiet, cold, calculating character and he suddenly launched a verbal bomb in Ethan Hunt’s face – Tom Cruise’s reactions might not have been 100% staged. I still don’t remember anything from that movie apart from that one Hoffman scene.

Doubt, a film with a Christian convent plot I had no interest in turned out to be great thanks to that electrifying scene between Hoffman and Meryl Streep where she accuses him of molesting school kids. Most people applaud Mads Mikkelsen in The Hunt while forgetting that Hoffman played a similar character in Doubt and was equally terrific.

And yet, I’d seen nothing of him before I was treated to the one-two knockout punch of Synecdoche New York and The Savages. Nothing I write could bring justice to his performances in those two movies. They’re two of the greatest American films and Hoffman really went the extra mile to establish the dysfunctional modern world that we inhabit. He certainly deserved the opening scene of Before the Devil Knows You’re Dead, another underrated gem where he was suave and classy to feign sophistry and an emotional trainwreck below the surface.

He was never the doyen of good health and fitness and it’s sad that he had to depend on drugs to fill the gap between fame, wealth and family.

You all know him as The Master, but it’s heartbreaking how meta Mary and Max has now become.

He could play anyone, and it’s depressing to know that we’ve been robbed of at least 20 years of great cinema because his best performances were ahead of him.

I’ve never been this upset by a celebrity’s death. I feel robbed. I feel cheated. I feel shock, and glumness. But mostly, I feel anger.