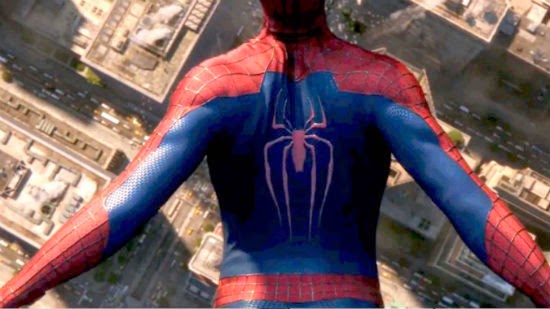 The Amazing Spider-Man 2 is much better than the first movie.

But then we need to get into semantics, because the first movie was absolutely awful and unwatchable. This one is bigger, more colorful and more action packed, but those three things are never enough to make a film amazing.

Some things about The Amazing Spider-Man 2 made me very glad – the new costume, the improved special effects and the humor. The shots of Spidey flying through the city look really cool, and on the big screen a couple of these sequences are quite breathtaking. In the costume, Spidey himself is hilarious and cocky, just the way he is supposed to be. In Sam Raimi’ss films Tobey Maguire was a terrific Peter Parker but a very bland Spider-Man. In this reboot Andrew Garfield is an ok Parker but a terrific Spidey. He mocks and plays around with the villains, his phone ringtone is the Spiderman song, and he hitches rides for free by simply grabbing on to moving vehicles. Electro shows up earlier than expected, and his showdown with Spidey is supercharged eye candy. When Spidey zooms through the skyscrapers to catch a Russian ruffian (Paul Giamatti), you believe there’s finally a fun superhero film that isn’t in the dark-brooding zone. Soon enough, your hopes are quashed to oblivion as the ‘story’ kicks in.

At this moment I have plenty of questions for director Marc Webb. In a genre where the villains are far more interesting than the hero, why would you not pay attention to building their characters? Did you not learn anything from Spider-Man 3? In an era that makes fun of movies like Batman & Robin, why would you make a movie that harks back to those laughably horrible movies? Rhino talks in a loud fake Russian accent and hams. Electro talks in an overtly emotional tone and hams. Green Goblin talks in an overtly villainous tone and hams. Spidey keeps seeing the ghost of Gwen’s dad, who hams just by looking at you. Aunt May also shows up for a subplot that doesn’t make any sense. Peter Parker is supposed to be a genius and he learns about batteries from a YouTube video. Spidey is thrown around power pylons so as to make them sound like the song ‘itsy bitsy spider’. Electro is supposed to be the centerpiece of the film, and his ‘motives’ for turning into a bad guy are so unbelievably lame it’s shocking. You’ll have to listen to the Electro theme song to understand how close the film comes to Batman & Robin.

The film is written by the magician duo of Roberto Orci and Alex Kurtzman who have been responsible for Transformers and a ton of other sci fi films that have terrible writing but somehow still make money. It’s like the studios have figured out a holy combination of marketing bombardment and Orci and Kurtzman’s collection of cheap thrills. Webb, being a music video veteran and the writers set out to make a string of music videos packed to look like a movie. The structure of the entire film is simply this: big action scene, followed by a pop song to the backdrop of Peter Parker-Gwen Stacy bittersweet romance. The first two times it’s nice to look at, but it happens over and over and over again until you stop caring.

We’re told about Peter’s parents in a manner that attempts to stun you with its mystery, but the mystery is so predictable you’re stunned for the wrong reasons. In a similar manner we’re told about the future of Spidey movies and the Sinister Six, but nothing more than what we learned from the trailer. Dane DeHaan might be a cheesy Green Goblin but he’s an excellent Harry Osborn, only because he’s played the same role in three earlier movies. There’s a wonderfully creepy scene where Harry meets his dying father. It’s a rare character moment, and I wish the whole film slowed down and focused on more of these. It’s what made Sam Raimi’s Spider-Man 2 one of the best superhero films of all time.