Movie Review: Gabbar is Back 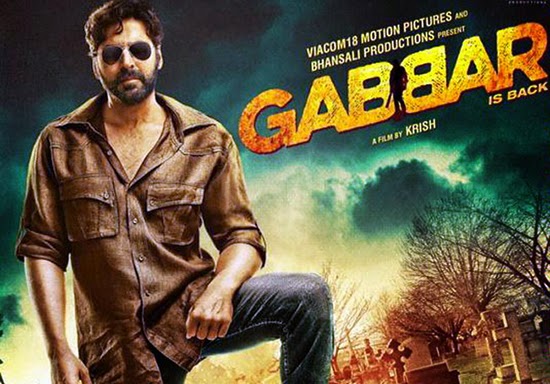 I was always curious to know why the new Akshay Kumar movie was called Gabbar is Back. This isn’t a sequel to any movie called Gabbar, so why does its title indicate otherwise? My existential query was answered during the opening credits of the movie, where we pretty much see the whole film through GIF images. To the backdrop of blaring music, we see that Akshay Kumar is a vigilante named Gabbar, he fights corruption, and finally kicks the villain in the nuts. And then the actual film begins – voila – Gabbar is back!

The film is directed by someone named Krish, who, presumably also wants to remain anonymous, either as a meta homage to the anonymous Gabbar character in the film, or evade the blame for this laughably bad movie. The thing is, this was originally a Gabtun Vijaykanth movie, and anyone who’s seen his amazing work in cinema will know taking the content too seriously will only invite ridicule. Ramanaa, the film on which Gabbar is Back is based on, was the same film that contained the worldwide sensation of a scene where Gabtun types a document in Windows Media Player. The same guy has also performed a heart surgery with the aid of a mobile phone.

It would have been perfect had this movie featured Akshay Kumar pulling a Gabtun and going the whole hog with ridiculous VLC Player typing and smartphone surgeries. For some reason the filmmakers decided to root his character in reality, and attempted to address some ‘serious’ issues and actually ‘inspire’ the youth with eyeball shattering manipulation. The ‘corrupt officials’ are caricaturist as hell, as are the ‘long suffering common man’ characters. You literally get characters expanding their chests, looking at the camera and declaring something either villainous or jingoist. You get wailing vidhwas, mustache twirling goons, doctors sniggering and frothing at the mouth while charging money for treating dead bodies, pot bellied police officers constantly eating, and a police van driver who somehow takes medical leave, goes undercover and unearths the identity of Gabbar when the whole Mumbai police couldn’t.

You also get a main villain named Patil, who constantly declares that ‘he is a brand’, accompanied by shots of the brand in question. You also get Gabbar grabbing Patil by the collar and shouting ‘GABBAR IS A BIGGER BRAND THAN YOU’. It feels like watching Gunda without the amazing characters and lines.

There is, of course, an attempt at amazing lines, as Akshay drones in his trademark passive voice ‘Tum corrupt officials ko rishwat aur naariyal dono ek cheez ho gaye hai, roz chadhana padta hai’. There is also a cringe-inducing cameo from a big star, including a song featuring the star and Akki breaking the fourth wall, in a totally white setup, as if in a soap ad.

V for Vendetta is not just ripped off visually but also aurally, thanks to Sandeep Chowta who simply recycles the background score and makes it loud enough to turn the Guy Fawkes mask’s smile into a sad emoticon. The only ray of light in this rumbling assault of stupidity is that the film is only two hours and ten minutes long, short enough to return home and assuage your grief by browsing Vijaykanth’s resplendent clips on YouTube.