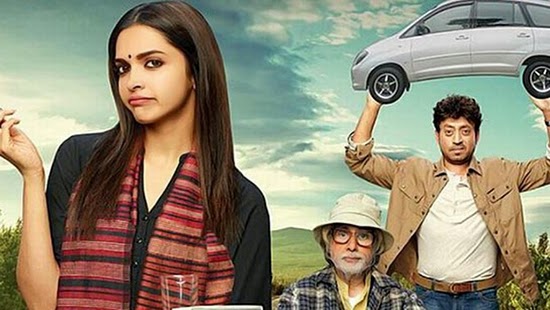 Having already watched and being disappointed by Finding Fanny last year, the thought of seeing another modestly budgeted Deepika Padukone quirky road trip comedy didn’t inspire much confidence. It’s rare for expectations to be smashed to smithereens and even rarer for a Bollywood film to do this with so much confidence. Shoojit Sircar’s Piku has arrived smack in the twilight of the blue moon. This film features the best ending to a Bollywood movie in a long time, and the stuff that happens prior to it is also quite lovely.

So here we have Piku Banerjee (Deepika Padukone), a Bong architect who live in Delhi her dad Bhashkor (Big B). Pappy is a raging hypochondriac, and perpetually constipated, and also, naturally, highly irritable. Everything in his life, and also somehow everything in the life of people around him depends upon his ungodly bowel movement. It doesn’t take much for his antics to drive people insane. So it becomes a task when Bhaskor plans to travel from Delhi to his native Kolkata, and naturally Pappy declares traveling by flight could be problematic for his bowel. The solution? Piku has to accompany Pappy on a cross-country road trip, along with Rana, a cab company owner turned driver (Irrfan), Pappy’s Pot and Potty assistant, and even the Pot seat.

It’s incredibly easy to dig this movie at the onset, not just because of fun performances from Padukone, Bachchan and Irrfan, but because it’s so darn easy to relate to it. There is a Bhashkor in every family – the stubborn, grumpy old man with the temper of a child and a heart of gold is omnipresent. And Big B portrays the character to perfection - he’s a well-meaning chap, just a bit forward in his manner and cranky owing to his illness. His utter lack of empathy for those on the wrong end of his forwardness is hilarious, as is his unreserved innocence regarding his prickly nature. You can’t stand the guy’s eccentricities but you can’t help love him.

There’s a lot going on in Piku, and writer Juhi Chaturvedi’s strong script coupled with Sircar’s solid direction somehow makes it all cohesive. The film explores some rather interesting themes – what does one do when the parent becomes difficult to handle and is totally dependent on you? How does one react when the parent is clearly upset about no longer being able to be independent, and becomes passive aggressive to assuage his frustration? Where does one draw a line between the parent being merely difficult and being a life stopping burden? How much can you sacrifice to make a relatively thankless invalid parent happy? Is it noble to consider moving out of the house and giving your invalid parent in the care of someone else so that you can focus on your career and social life? What can the parent do if he thinks he’s being a burden to his children? Piku doesn’t have the answer to all these questions, but it is bold enough to take you through them and make you ponder.

The film also makes the best case for women empowerment since Queen. In the film Piku is single, but has a casual sex life, and this fact is established very subtly, and not in a pointedly manner. This is not a ‘character trait’, but it just happens to be another normal thing that this normal girl does. And to top it all, even her father is liberal enough to not make a fuss over that. He has the occasional well-meaning concern, but he’s not the regressive honor killer that is so prevalent in both in and outside our cinema. When was the last time you saw a Bollywood film where the father suggests to his daughter that getting married soon is only for those with low IQ? Last I checked, Sonakshi Sinha wanted to be ‘blessed for marriage’ by seeing Ajay Devgn’s schlong. In this film, the Bechdel Test is effortlessly kicked in the nuts in a terrific ‘will they won’t they’ scene between Piku and Rana that warrants a huge applause for both Chaturvedi and Sircar.

Most importantly, the film glides over all of these heavy-duty themes with breezy lightness and consistent, well-timed comedy. This is a road trip movie after all, and it’s got hysterical rapid-fire montage of cuts of the back and forth between the trio of Piku, Bhaskkor and Rana. The teeny bit of melodrama is handled beautifully by shuffling laughs and tears together like a pack of cards, making Piku one of the more emotionally honest films to have come from the industry.