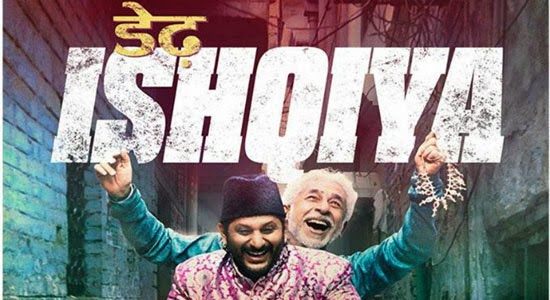 My impasse here is to convince you to see Dedh Ishqiya without revealing too many plot details, which is like a salesman persuading you to buy a car because it is red.

Suffice to say that Dedh Ishqiya is smarter, funnier, richer and way more gorgeous than its predecessor. If you're a fan of really, really great writing, masterful direction, clever lines, terrific actors, Urdu literature and shayari, Dedh Ishqiya delivers by the truckloads. And if you were worried that Abhishek Chaubey and Vishal Bharadwaj had exhausted their supply of sardonic dialogues in the first film, relax. Dedh Ishqiya not only outdoes the wit and intelligence of the first film, but is also the finest sequel and perhaps the most hilarious thriller to come from Bollywood. Few filmmakers have the ability to deliver dark and nuanced humor with such confidence, and the Chaubey-Bharadwaj team have pretty much outdone themselves with this deeply awesome installment.

The story picks up an indefinite amount of time after the events of the first movie. Babban and Khalu continue to con their way through life in the hinterlands and evade being buried alive by their former boss Mushtaq (Salman Shahid). After a heist goes wrong the duo chance upon a lifetime opportunity of carrying out the ultimate con and 'settling down' in a gigantic Scindia style palace occupied by the ridiculously rich Begum Para (Madhuri Dixit) and her subordinate Muniya (Huma Qureshi). Trouble brews and hilarity ensues when the villainous Nawab Jaan Mohammad (Vijay Raaz) decides to contest Khalu for Begum's hand over a round of Shayari and Target Shooting'.

There’s a severely satisfying degree of subtext beneath the front layers of Dedh Ishqiya, and homages are only a part of the film’s intelligent satirical touches. But don't let metaphors and subtext get you down, Dedh Ishqiya is first and foremost a very entertaining movie. Plus it's got a generous dose of cinematic ‘moments’, and a terrific special effect – romance between Naseer and Madhuri Dixit.

Much of the film’s humor comes from dry sarcasm and a deliciously acidic sense of irony. The genius is in the details. Chaubey and Bharadwaj fill Dedh Ishqiya with an array of stunningly colourful sets to complement the layered writing and set the film in a see-saw of the hilariously absurd and the absurdly hilarious. While Naseer and Dixit wax on Ghalib and Lihaaf a shot shows a bar with the signboard ‘Bhayankar Chilled Beer’ and a railway station is called ‘Baap’. There are deconstructions of Mexican standoffs, juxtaposed to beautifully ironic songs, and they’ll make your belly ache with laughter. The Shayari contest between Khalu and Jaan Mohammad is itself worth the price of admission.

As the film goes through its myriad of twists and turns the viewer may recognize how quirky the characters are. And once the secondary characters branch off individual plot threads Dedh Ishqiya feels like a multi-pronged classic. Not to mention the wonderful production design and Setu’s elegant cinematography that gives your retinas a spa massage. There’s poetry in the lines as well as in the frames.

Naseer and Warsi really are a classic on screen couple - the camaraderie between them is a lot of fun. As in the first film Babban and Khalu are dysfunctional to an astronomical degree - they bicker, fight, dupe each other, but ultimately can't do without each other. Babban and Khalu are funny guys, but they'll go to any extent to frame people and manipulate situations to get what they want. And Naseer and Warsi portray their impious characters with a refreshing lack of apology. Naseer is quite lovable and you can tell that he's having fun in his role of a slyly fiendish and the winningly romantic conman. This time Naseer loses his faux youthful mehendi beard but gains a shade of vulnerability to his character. Faring just as strongly is Arshad Warsi who is once again amusing, and exudes a surprisingly darker shade to his character. Babban is a romantic on the outside but deep down he'll manhandle and slap women if he feels betrayed. Warsi nails both sides of his character - he should really do more films like this one instead of stuff like last week’s unmentionable dud.

With her pale visage and haunted eyes Madhuri Dixit looks stunning and has a couple of superb scenes with Naseer, but doesn’t have the magnetic screen presence of her former self. The fact that she plays a formerly beautiful and popular star makes her casting and performance kind of meta. It’s still great to see her back on the big screen in a really good film. Qureshi continues the super strong ‘don’t mess mess with me’ attitude from her previous films and seems to have perfected her style here, it’s nice to see that she’s getting better and more wide ranging with every film. Manoj Pahwa in a small but significant role is quite terrific. Bringing down the house is Vijay Raaz who is delightfully scummy and displays some previously unseen acting chops, teasing every comic as well as menacing possibility out of Jaan Mohammed’s character. The guy is an acting giant who can effortlessly make even the most jaded moviegoer applaud. It is frustrating that he doesn’t appear in more movies.

The only problem is that there are no ‘hit’ songs like Ibn-E-Batuta and Dil to baccha hai ji and that might not bring in audiences in droves, and that’s a shame because the songs (Gulzar-VB) in Dedh Ishqiya work really well within the film. And the film deserves to make hundreds of crores, because it’s a hundred times better than part one. It’s a rare movie that delves in intelligent humor and succeeds so brilliantly. It transported me to a more cheerful and less cynical headspace and I fell for it all the way. You will too, so check it out.

(First published in Firstpost on Jan 9, 2014)
Posted by ElmerFuddnavis