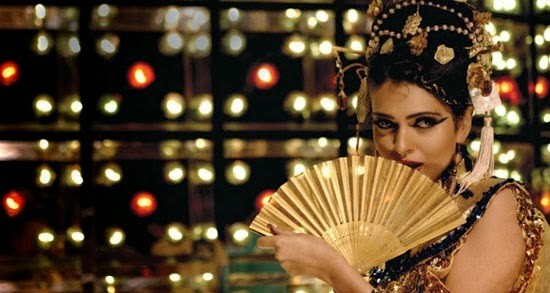 In the opening scenes of Miss Lovely a man in an 80’s Ramsay-esque movie wanders around a dark haunted house with a candle, and is suddenly grabbed by a saree clad nubile female ghost. Later, we’re plunged into a film set where a heaving, semi naked woman is attacked by an overtly masculine monster, and the director who is off camera pinches the woman’s thighs to make her scream. This scene is projected on the screen of a seedy theatre where a pervy old man sits and smiles lasciviously as the woman suggestively moans when the monster assaults her. Director Ashim Ahluwalia beautifully demonstrates how enormous an impact horror filmmakers like the Ramsays, Harinam Singh, Gyanendra Chowdhary and their ilk had on India’s B-movie industry and the psyche of desi film buffs.

Some will appreciate Miss Lovely for its experimental arthouse style. Others will hate the film and call it a slow, story-less and pointless exercise in indulgence. But those like me and most desi D-grade horror fans will be fascinated to see (and hear) how 80’s low budget Hindi horror movies were made and delve into the unglamorous world of their production. What you’ll probably not expect is Miss Lovely being a moody rumination on loneliness, alienation, and desperation. It’s not the kind of film you’d watch every week but it’s impossible not to be mesmerized by its audacity.

The film follows a typical lower middle class bloke Sonu Duggal (Nawaz) who arrives in Bombay and finds some footing when his B-grade filmmaker brother Vicky (Anil George) offers him work in his cinema. A young and innocent girl named Pinky (Niharika Singh) shows up and Sonu is so besotted with her that he lies to her about being a filmmaker with the intention of turning her into a star. Things get ugly and Sonu gets embroiled in the murky underbelly of the B-movie industry, cops, shady gangster film producers and his desperate brother.

Theoretically this plot should make me giddy with delight and transform the very face of ‘Bollywood’. But this is a rare movie that is terrific yet simultaneously frustrating, because director Ahluwalia just doesn’t expand his plot. The story only kicks in the second half and just when it is about to mature into something truly great Ahluwalia pulls the rug from under your feet and just ends the story, but continues the film. What actually follows is an extremely long and indulgent existential slog through the eyes of Sonu, with various intentionally languid still shots of staircases, houses, foliage, telephones and buildings. The effect is so jarring it feels like Ahluwalia is deliberately blocking a good story from being told just for ‘film festival indulgence’. It’s maddening because there was so much effort put in every other aspect of the film.

You can’t even credit the film to be a character driven, rather than a plot driven piece. The screenplay reveals absolutely nothing about Sonu’s life before his arrival in Bombay and doesn’t provide much for him to do after the city clobbers him to near death. There is a brilliant dramatic contortion towards the finale but by this point the fundamental problem of the film not having a meaty story prevents it from elevating to the masterpiece level that it could so easily have reached. It’s a sad but solid reminder that without a good story no movie would become great, no matter how brilliantly acted, directed and shot it is.

Despite its drawbacks, there’s plenty of dark and wonderful stuff within Miss Lovely. The atmosphere in the film is so intoxicating it will take your breath away. The moody lighting and ambient sound design render a hypnotic feel to the film. The detailing is ridiculously good – all of the stuff from 80’s is omnipresent - from the Weston C90 cassettes to the Mirc television sets to the ancient projectors and reels to the polka dot clothing to yellow colored Yezdis. There is even a shot of Bombay traffic in the 80’s with all of the cars that were present in that era – how Ahluwalia pulled that shot off is a mystery. Most importantly Ahluwalia doesn’t make the sets too showy, thereby adding to the realism of the film’s timeline.

As a lifelong lover of horror and B-cinema I found a ton of things to admire in Miss Lovely, like Ahluwalia’s ability to create an oppressively dreadful yet hilarious setting. In one of the film’s most memorable scenes a B-movie producer - a dwarf who sits in a grungy office with walls covered in smutty photos - is approached by a wannabe actress to star in an adult movie. She hands him her photographs and says ‘mai sexy dance accha kar leti hu’ and starts gyrating, and the producer points out to Sonu how busy he is.

The ‘filmmaking’ scenes, like the African jungle dance one are amusing. The sets are filled with bizarre scummy pulpy people you never expect to meet in your life. These are the rodents of the film industry and Ahluwalia presents them to you with glee. Hilariously, the B-movies being filmed in the film sometimes feel more real than the one we’re actually watching.

The casting and performances are flawless. Nawaz is yet again excellent – he switches from good natured and innocent to helpless, desperate and violent without missing a beat. Whoever discovered Anil George deserves a trophy because he’s a hell of a dramatic actor. Watch him in the scenes where he verbally spars with Nawaz and you’ll know we have a Vijay Raaz-Deepak Dobriyal competitor. Newcomer Niharika Singh is icily mysterious (not to mention gorgeous). The junior artistes are all wonderful in their tiny roles.

Miss Lovely breaks a lot of ‘Bollywood rules’. You can bristle about its indulgencies but I'll still prefer a movie that fiddles with the rules over an easy commercial one. Especially if it has a climax that features blood and a Nazia Hassan song.

(First published in Firstpost on Jan 16, 2014)
Posted by ElmerFuddnavis